The art of puppetry is an art of interdisciplinarity, borrowing, transforming and combining endlessly tradition and modernity, creating new and original theatrical forms, influencing other art forms. Lumen aims to be an opening for the sector of the puppetry arts in the Wallonia-Brussels Federation towards digital arts and their diversified practices.

This 5th edition is an invitation to discover several new installations / performances. From a robotic installation drawing your portrait, to a performance inspired by the work and life of Louise Bourgeois, a virtual journey where you will be invited to grow imaginary cities without forgetting several digital installations of art students, all more surprising ones than the others. 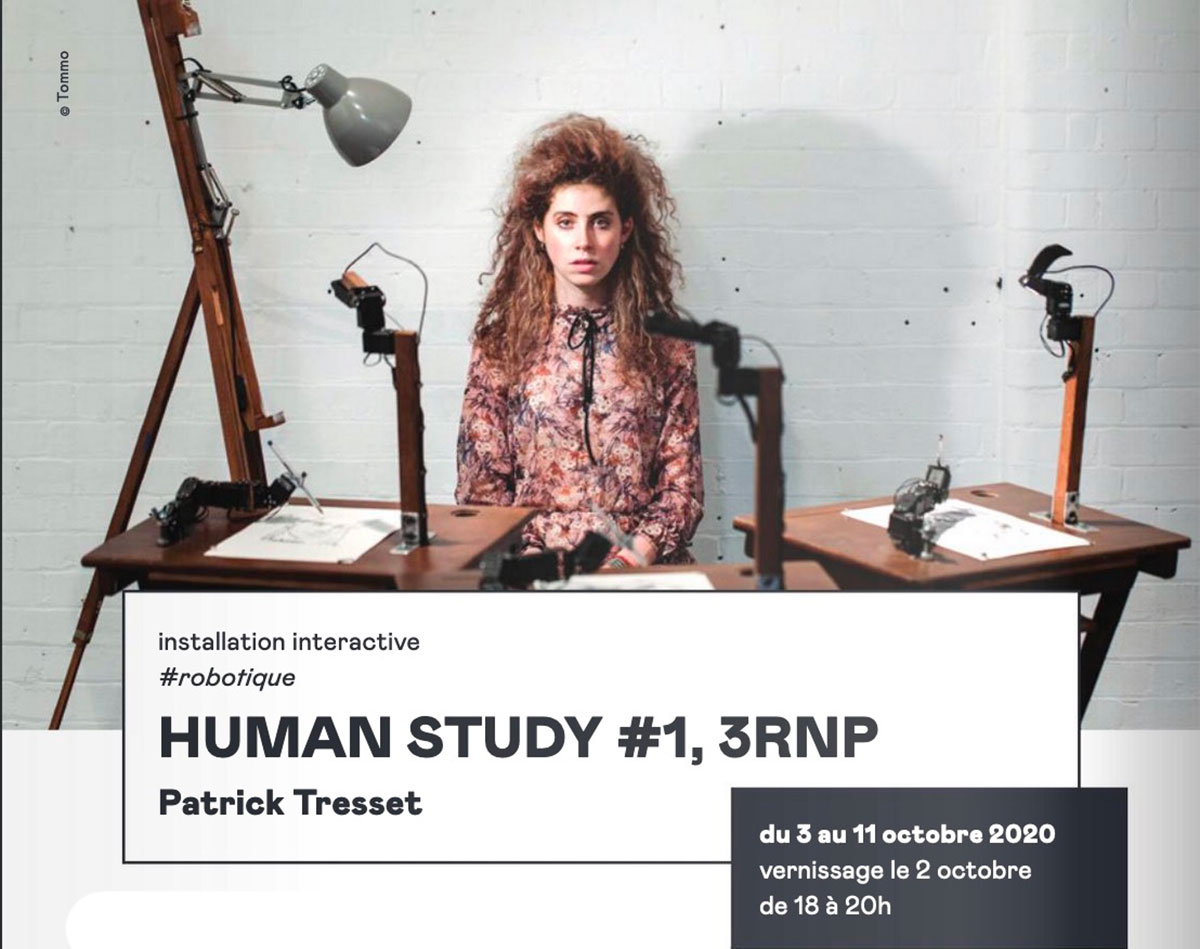 Sit down and let three robots sketch your portrait.

In Human Study # 1, 3RNP, the human becomes an actor. Three robots, whose drawing style has evolved over the years, will study and portray the person who comes to pose for them. Seated at wooden school desks, these artist robots will create a portrait at the Bic. During this 20-minute session, the model will remain still and will not see her portrait until the work is completed.

This public presentation celebrates the official release of the book “When technology meets puppetry” directed by Françoise Flabat and Philippe Franck.

This publication, co-directed by Françoise Flabat and Philippe Franck, and initiated by the Puppet Center of the Wallonia-Brussels Federation which piloted this prospective project, is intended to be both a feedback and an opening on the achievements, contributions and main challenges of this platform dedicated to the intersections between the arts of puppetry and digital creation (see presentation below).

This presentation takes the form of a meeting / debate with the participation of the publishers of the book as well as participants of the European project N.A.P.P. (including the World Puppet Festival in Charleville Mézieres in France and the Tony Bulandra Theater in Romania) of which she is also a critical trace. 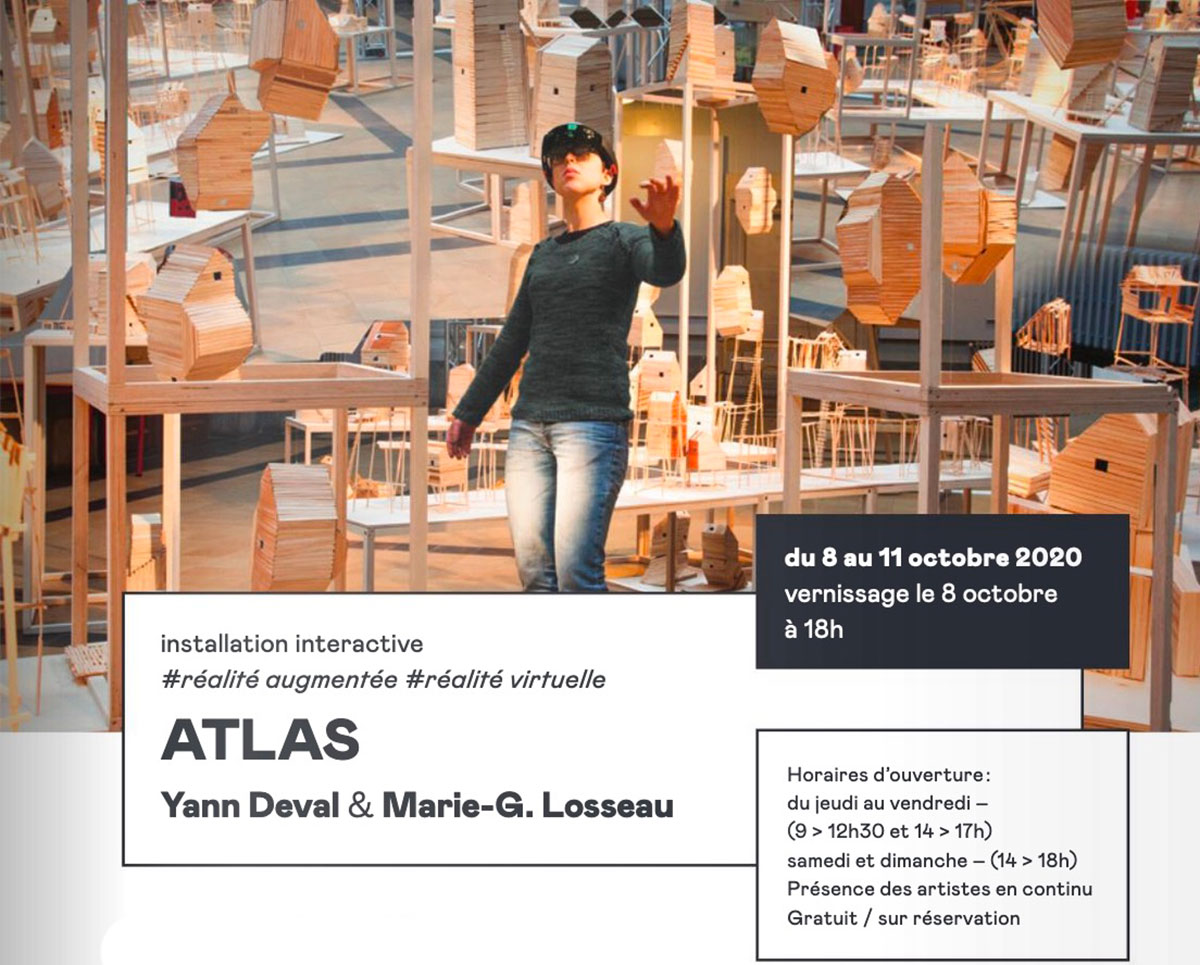 This installation is a true digital fable, a technological adventure to explore with the family.

Equipped with an augmented or virtual reality headset or a tablet, spectators are invited to build their imaginary cities using a seed launcher. Each throw will sprout a house around it. Houses grow by following certain town planning rules as well as by adapting to their environment. Cities go on with their own lives with or without user interactions, like living organisms.

Atlas is a hybrid work of digital and visual arts, in the form of an interactive installation made of models of imaginary cities and virtual and augmented and mixed reality experiences. Marie-G. Losseau builds imaginary cities, alone or with adults and children during workshops. Yann Deval scans the houses in 3D in order to immerse the audience through virtual experiences. 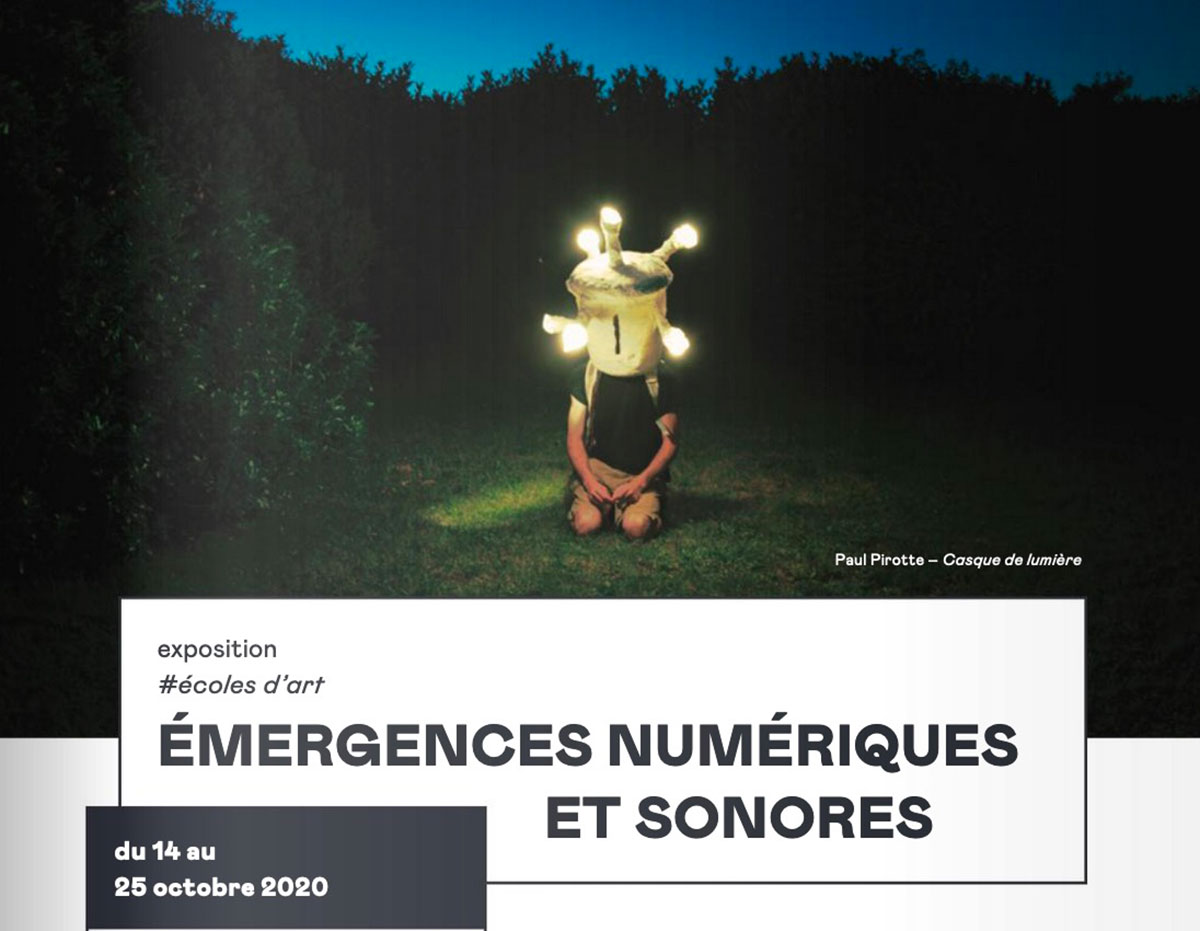 Transcultures, which in 2008 initiated the Digital and Sound Emergences support program in partnership with art schools in Wallonia-Brussels and France, and the Maison de la Marionnette join forces to support and promote digital, intermedia and / or sound projects by students from the Eurometropolis.

Amelia Belhadj (FR) – Ambient Silences
This installation invites us to explore the electromagnetic fields and parasitic sounds (emitted by smart phones, advertising screens, etc.) which inhabit our urban daily life not always perceptible by our human ear, by trying to make them audible in order to become aware and aware of this environment – “noise pollution”. In order to make these waves “visible” in a concrete way, to give them a materiality, Amelia Belhadj used iron filings, which itself has magnetic characteristics and reacts here to sounds to become, when it is like here in motion, an organic material.

Annaëlle Oestreich (FR) – The wave
Based on Newton’s third law, called the law of action-reactions, Annaëlle Oestreich filled five suspended plexiglass spheres with seawater, the shape of which is reminiscent of Newton’s pendulum but also the shape of an abacus. or that of our Earth. This is about creating a relationship between force and fragility, between action, non-action and reaction (the visitor being invited to activate the device), referring to our balance of power with nature.
Produced as part of the Arts & Sciences program, proposed by Prist (images, science and technology research program of ESA Nord-Pas de Calais – Dunkirk / Tourcoing).

Léa Roger (FR / BE) – Remanence
Sound is like an invisible presence that only exists through my listening. But if I can’t hear it anymore, then what is left of its existence? If he leaves clues of his presence, like a ghostly specter, it would be like an afterglow, a light that sparkles, a breeze that brushes against us. We could then contemplate the luminous, ephemeral and always moving drawing of invisible traces that we leave when we move, amplified footsteps, a drawing that would reflect the activity of the place, like a topographical score of the polyphony of our trips.
Project initiated within the framework of Corps Sonores (ARTS2-ESA Nord-Pas de Calais collaboration) with the support of Transcultures and European Pepinières of Creation.

Paul Pirotte (BE) – Helmet of light
Paul Pirotte likes to walk, in the evening, in the streets, woods and fields like a firefly. He then wanders off into the depths of the night to light his way with his voice. It screams, screams, emitting sounds from elsewhere to produce primordial energy. With this misshapen helmet here associated with a video that accounts for this drift, he causes a luminous aura on the sound of his voice. The antennas, the neurons of this strange being temporarily illuminate this course and the space that welcomes it.
With the support of Transcultures, in partnership with ARTS2, as part of the Digital and Sound Emergences program. 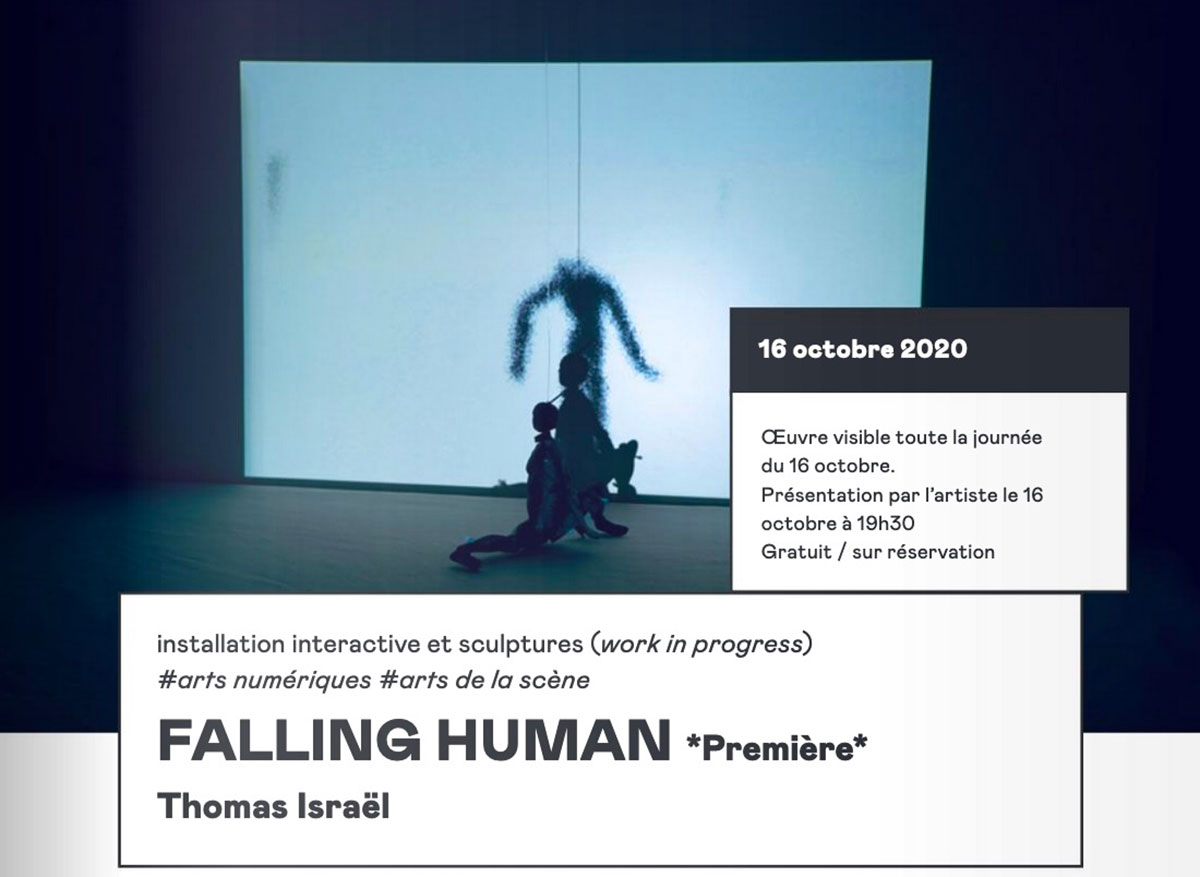 Thomas Israël (digital artist, visual artist, performer from Brussels) is the winner of a call for projects launched this Summer 2020 by the Maison de la Marionnette and Transcultures for the creation of an original work combining digital, scenic and puppet arts. Presented in Tournai in a first installation and performance stage of creation, ‘Falling Human’ is described by its designer as follows: “From the fall of a particular human to the fall of a certain idea of our civilization, the falling human makes me think about our condition, the fragility of our “upright” position, as much from a physical, psychological as societal point of view. He challenges me organically, starting from the story of the little human who tries to stand up, going through the wounded human struggling to rise up, to the history of Homo Sapiens rising to its disembodiment, replacement, fall or annihilation.” 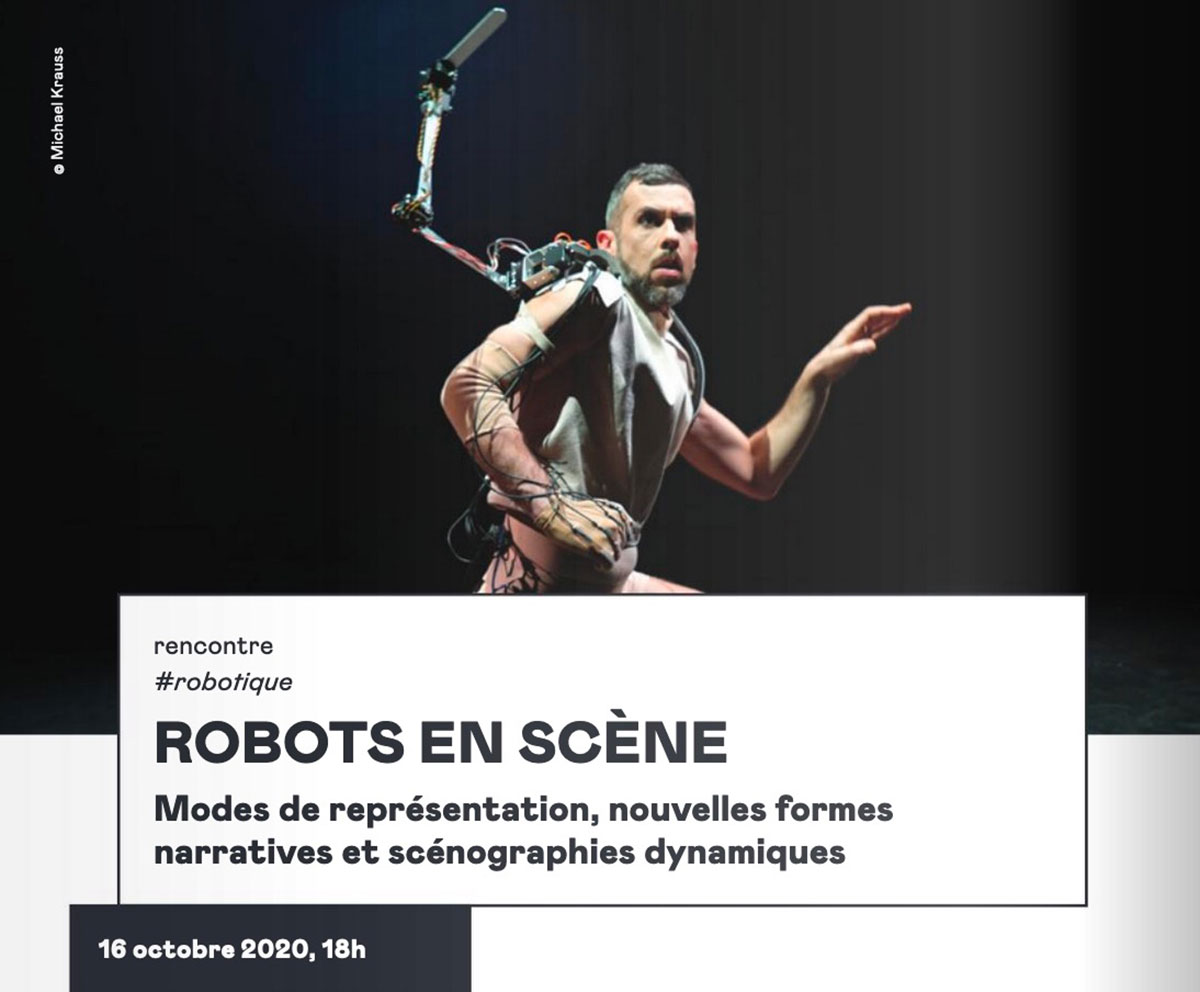 Around Philippe Franck (art historian, teacher, director of Transcultures) gathered for ‘Lumen #5’, several creators and researchers (including Nathalie Stefanov – art critic, exhibition curator, teacher at the ” ESA Nord-Pas-de-Calais and associate researcher in the laboratory of the Center d’Etude des Arts Contemporains – University of Lille) and Jérôme Decocq- member of the Labau collective and professor at Arts2) from different horizons invited to discuss various issues related to the specificities of digital arts in their artistic projects and / or research. The common thread of these presentations is the link between the integration of elements related to robotics and a reflection on new narrative and scenographic modes.

Creation / performance bringing together giant puppet, moving body, music and projection. L Louise is inspired by the life and work of Louise Bourgeois. Based on the iconic sculpture Spider, it will be about questioning the impact of childhood, bonding, the role of mother, woman, and artist. A performance that brings together puppets, dance / movement manipulation and digital arts.