Transcultures, Interdisciplinary Centre for Digital and Sound Cultures, is launching a call for projects for the exhibition of the 16th edition of the City Sonic International Festival of Sound Arts which will take place, for the main installations sound trail (+ performances & workshops), in various locations in the city center of Louvain-la-Neuve (Belgium), from November 21 to December 1, 2019 and in Braine L’Alleud (Emergences sonores exhibition at the art school + workshops and performances, winter 19 – dates to be confirmed) and Wavre (sound trail end of January 2020 in several places to be defined). 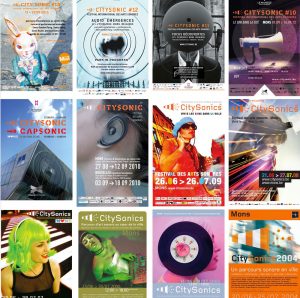 In 2003, Transcultures, Centre for Digital and Sound Cultures, initiated City Sonic in the Wallonia-Brussels Federation, a festival dedicated to the diversity of sound arts in the urban space. After having been organized for a long time in and with the City of Mons, the festival has invested Charleroi in 2017 before becoming a Biennial and presenting in November 2019, a 16th edition “Winter Sessions – Emergences” in Louvain-la-Neuve (21.11> 01.12.2019) and in other partner cities of Brabant Wallon (Braine l’Alleud – dates to be confirmed, Wavre – last week of January 2020).

Each edition of this unique “manifestasound”, which has quickly developed an international reputation, presents dozens of projects of various aesthetics, with sonic dimension in situ (with works either new or re-adapted according to the place of reception) with a spirit of a trailblazer, yet travelling and unifying.

This 2019 edition is dedicated to sound emergences*, with a priority given to new hybrid audio practices, young creators and singular artistic discoveries. The sound trails in the city (punctuated with performances and workshops for young audiences and others), including the main one in Louvain-la-Neuve, are planned in partnership with UCL Culture, from November 21, 2019 to December 1, 2019 (some events may start sooner and stop a little later).

*based on the name of a programme to support projects of students from different art schools in Wallonia-Brussels conducted by Transcultures, the best of which will be broadcasted in the festival