Within the framework of the Interreg cross-border project C2L3PLAY – Cross Border Living Labs, a call for economic, artistic, and technological projects is launched. This call aims at projects by designers, artists, entrepreneurs, small and medium-sized enterprises in the field of creativity.

Global context: “Expressing the creativity of the regions”

In 2004, UNESCO launched the Creative Cities Network (UCCN), a global cooperation that focuses on creativity as a lever for urban development and dynamism. Recently, Kortrijk has joined the UCCN as region of design , bringing together and strengthening local initiatives in creativity, innovation and entrepreneurship. More broadly in the northern cross-border regions, Lille, elected World Capital of Design in 2020, shows a general trend for the Creative Economy of cities and regions.

This enthusiasm is reflected in a number of projects such as matchmaking events (5×5), fairs (Biennale Interieur), the creation of digital and crafts workspaces (Buda::lab, Numédiart, UMONS, Le Fresnoy,..), culturathons (Louvre Lens Vallée), creative collaborations,… all relating to creativity in the broad sense (crafts, art, design, film, music and literature), and attracting an international audience of professionals.

On the global scale one sees that many cities call themselves “creative cities”, thus fitting into a territorial marketing logic. Yet only a certain elite of the population – called “super creative” by Richard Florida – has the opportunity to engage in the realization of new ideas for their territory and to enjoy this experience. But what about the general public such as citizens, local communities, local entrepreneurs or visitors? How do they participate in the creative city? Why would they contribute? What is their benefit?

The call for projects

Based on this observation, this call for projects invites designers, artists, entrepreneurs, small and medium-sized enterprises in the field of creativity to propose innovative and inclusive projects (services or products). These projects contribute to the visibility of the creativity of cities and regions involving the general public to co-create with public institutions, universities and companies.

Although many previous projects have resulted in tangible results, the creative processes leading to these outcomes are often not perceived by the public in general. The Kortrijk region for instance has numerous companies making semi-finished products. It is known by few, this products are used worldwide in a series of renewed brands. The American dollar bill for example contains flax fibers grown in Kortrijk. The aim of the call is therefore to express regional creativity (Wallonia, Nord-France, West-Flanders) making appeal on the capacity of the local fabric to develop humanistic and cultural responses, involving collective intelligence.

The objectives of this call for projects are:

We support designers, artists, entrepreneurs, small and medium-sized enterprises in the field of creativity with innovative methodologies such as Design Thinking, focused on the user experience – from the needs identification phase to experimentation, ideation and prototyping. An inclusive approach that adapts to all stages of project maturity, in all sectors of activity. 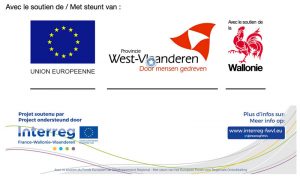 C2L3PLAY is an Interreg cross-border cooperation project between France-Wallonia-Vlaanderen co-financed by the European Union and supported by 9 partners in France and Belgium.

C2L3Play (Cross Border Living Labs) is THE living lab of the Cultural and Creative Industries of the cross-border region Hauts-de-France/Wallonia/Flanders.

Convinced that it is thanks to co-creation and innovation processes that projects grow, the C2L3PLAY partners have already committed themselves to 9 project leaders in France and Belgium!