As part of its ‘Vice Versa” program of cross-digital residences, Transcultures (interdisciplinary center for digital and sound cultures based in Charleroi), launched a third residences exchange with La Chambre Blanche (visual and digital arts center in Québec) between the Federation Wallonia-Brussels and Quebec, for the realization of a project in the field of the digital arts. 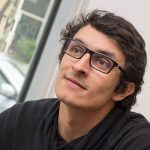 Multidisciplinary artist Paolo Almario is interested in the spatiality of being. Defined as the accumulation of spatial variables that shape an individual, this identity system is composed of all the places in which the most important experiences of a lifetime took place. While in residency at the Galerie Sans Nom he will use his computer, digital sensors and film production tools to modulate, automate, code, process and materialize digital samples of one of the most representative places in Moncton in the form of a film.

Born in Colombia, Paolo Almario lives and works in Chicoutimi (QC). He received his training at the Facultad de Arquitectura y Diseño at the Universidad Los Andes (Bogotá) and holds a Masters in Art from the UQAC. His work has been shown in Colombia, Switzerland and Canada. 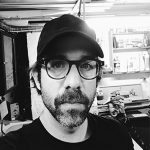 Mathieu Zurstrassen loves machines, which leads him to craft, with a luxury of invention, machines sometimes utterly useless. At the Kikk Festival in November 2016, he exhibited a “surveillance” machine. Graduated Architect, Mathieu Zurstrassen has an obsessive need to study the mechanisms that surround us. His desire to dissect begins with two years of medicine, then he branches off towards architecture. In 2013, after nine years of construction, he leaves the field of the useful to go in search of the useless. He builds machines, drawing machines, robots, automatons, strange gears with cylinders and motors… At the crossroads of anatomy and architecture, he plays with perspectives, geometric shapes, superposition and distortion. His inspirations come from various sources, appropriates techniques of drawing such as anamorphosis, or the tribal symbolism of the tribal Headdress.

This combination of human forms and complex devices gives birth to hybrid creations, astonishing. Is all this only a fairly learned, brilliant, but gratuitous game? No, Zurstrassen takes a lucid, satirical, caustic look at the world around us. By shifting away from our daily reality filled with devices, by turning them away, it reveals a mutant universe. We think of the Meta-mechanics of jean Tinguely, piloted by artificial intelligence. Art is always a game with matter and time, and Zurstrassen plays with our perceptions, the ephemeral and the duration.

The Eye of God At the Kikk Festival, he exhibited an installation with the a coded name: _QMD / X2 contraction of “Quo Modo Deum, or” the eye of God “, evocation of the state of control, hot topic if it is. A mechanical drawing machine draws the plan of the famous Panopticon prison of Jeremy Bentham, of which some modern prisons are inspired, arrangement of the space that prevents the prisoners from escaping the glances. It is an artistic gesture, a nose-thumb reflected in these ubiquitous systems: the audience enters the room, a sensor collects information on the circuit of each visitor, the data is analysed by microcomputer and then transmitted to a Rotating mechanism on the support to be drawn. Reference to the universe of hackers, the visitor alters the monitoring device. At a time when the increasingly powerful machine-learning algorithms held by some multinationals can recognize a face and associate a multitude of metadata, _QMD / X2 diverts this formidable science with a mesmerizing and salutary irony. JFHG, 2016