Transcultures offers three audio environments (in the form of listening lounges) bringing together explorers of sound who, starting from music and texts from the Erasmus and Renaissance times, form the link with the contemporary and their own research. artistic.

“It is thanks to Erasmus that we have the image of Pandora’s box – before the renaissance depictions of Pandora were focussed on her creation/liberation from the earth, since in the  Greek mind she signified the first woman. Erasmus  mistook pythos with the other Greek word pyxis, meaning box when he was translating Hesiod. Hence creating the ‘box of Pandora’ that lives on like a metaphor in our western culture. In other recounts of the story, there was not even a mention of the jar. In this sound piece layers are sawn together by the means of voice, connecting field recordings of the sounds of Brussels with echoes of renaissance lute music from the Netherlands, and Pandora’s many ‘gifts’ resound in the oscillations, the space inbetween.”  Maja Jantar

Maja Jantar is a multidisciplinary ceramic artist and director who excels in improvisation. She lives in Ghent. A vocal artist, she practices polypoetry (poetry, breaths, visual arts, mouth sounds, sound arts, land art, rituals and performing arts; a limitless poetic practice. Among her recent projects, we can mention U Ki Yo E – a multimedia collaboration with Logos Robot Orchestra where voice, movement, robots and video animation create a sensory journey through a Japanese print.

Raymond Delepierre : “The installation aims to slow down the speed of passing time, it envelops your body like winter woolen. Stubborn Waves, as if out of the earth, bring back to the listener the sounds contained in the magma of earthly life. The sculpture’s two loudspeakers sweep in a wide circular motion, slowly, across the listening space. Black in color, the whole could be austere, dark in these shades that sometimes evoke unpleasant things. Here everything remains airy, the black offers a sober setting, it leaves space for shapes and diffused soundscapes. The two horns emit soft, powerful sounds with more tonic bursts from the sounds of the city, caught and brought back. indoors by external microphones, with acoustic treatments that color them without completely erasing the sources. This installation refers to the means put in place by military protagonists during the Second World War to fight, spy, attack, and appropriate the other by means of amplification and sound capture, such as big ears, radars, sonar, brown frequency.”

With the support of Transcultures

Raymond Delepierre is a sound artist, sound engineer, teacher (sound arts) at the National Art School of La Cambre (Brussels) and technical director at theatre Rideau in Brussels. It was by composing from the noises of simple objects and equipment in our daily lives that he affirmed his desire for the shaping of sound through sound installations. He has an interest in the thing that lives, sounds and their spaces of interaction, sounds as materials, as objects, as archives, as sculptures. He organizes, transforms and modifies them to offer them another function. Using basic solutions, he captures magnetic, radio, electric and aerial radiation in order to constitute a sound identity that he cuts into sequences by the interaction of one event on another. The result is an evolving and moving sound writing suite.

This suite is based on fragments of love poetry from the 15th and 16th century (Marguerite de Navarre, Catherine des Roches, Etienne Jodelle, Maurice Scève, Joachim Du Bellay …) voiced by Yvette and Philippe Franck, and electronic soundscapes (some of which were created from works by Belgian Renaissance composers including Johannes Ockeghem and Roland de Lassus) designed with Didié Nietzsche (alias A Limb) and mastered by Yadleen.

Didié Nietzsche (Radio Prague, 48 Cameras, Lamaφ) solo project. A Limb (BE) is a kind of artistic Frankenstein, exhuming all sorts of music corpses from their graves, stitching an ambient body with funk legs, punk feet, experimental arms, jazz hands, a drone head, inserting a big ethnic music heart and krautrock lungs… then bathing the whole “body” in a dub bath, until an electro thunderbolt strikes him and he is… alive! Yes sometimes science goes too far, but it is too late to go back. 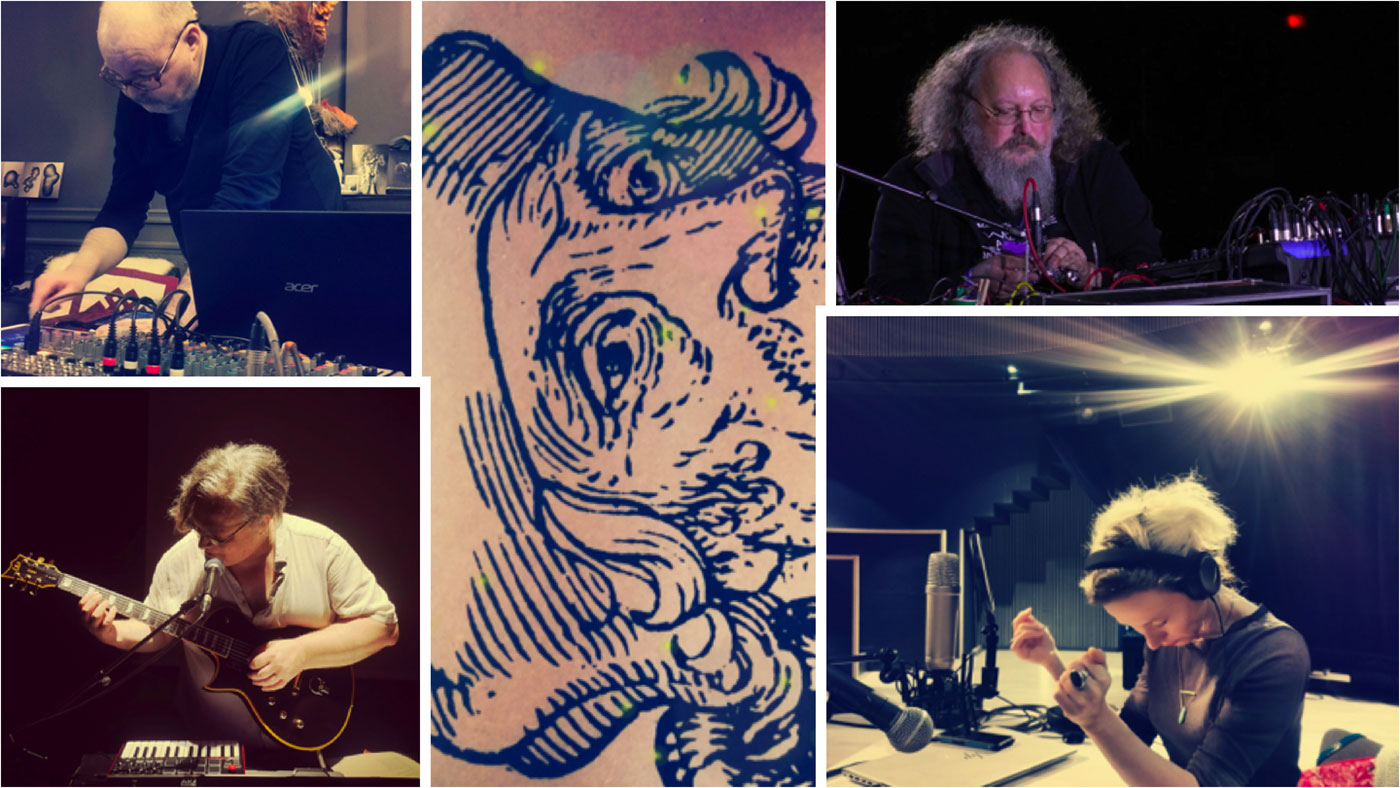 Insatiable explorer of sound, image and the media since the 1980s, Alain Wergifosse amplifies all kinds of resonant objects and specializes in the electronic processing of feedback to achieve his organic compositions and improvisations. He has traveled the world solo and with various groups and collective projects (Obmuz, Macromassa, SpecOp, Colectivo Anatomic among others). From his base in Barcelona, ​​he composed, during ten years, the music and sound interactions of the shows Marcel lí Antúnez (ex La Fura dels Baus) and he collaborated with many artists of the experimental musical scene ( Zbigniew Karkowski, Cluster, Jaki Liebezeit, Francisco Lopez, Nad Spiro, Eli Gras,…) and actively participated in various adventurous initiatives in Spain and internationally. In recent years, returning to Belgium, he has developed his visual work and produced immersive and interactive installations, self-generative videos, microscopies and other materialist compositions presented in several festivals and international events (City Sonic, MEM, Kikk, Semaine sound, Simultan, Transnumériques…).

In direct live exchange with the public, the Lamaφ collective offers a 20-minute performance that resonates with the ‘Autonomy – plural arts centre where Lamaφ is currently in residence.

This transdisciplinary performance – analog and digital live music, dance, video, voice – takes as a common thread – “creating links” – in reality, an essential and vital need for the human species on a planet which increasingly isolates the individual. In the present moment, Lamaφ adapts to circumstances while feeding on the energy of performative space. The spectator will be part of the board and will have the opportunity to move around the playing area in order to vary his listening points, his viewing angles of the performance in progress.

In its artistic research, the LAMAφ collective aims to open up the field of possibilities in a time of unprecedented crisis where reality is transformed in an unforeseen way. Lamaφ wishes to both develop new artistic creations and make its engagement accessible and enriching for others, while being inspired by the MbUS (Music-based Under Score) concept of double bassist and dancer David Leahy.

Lamaφ was born in March 2020 in the midst of a pandemic at the initiative of musician JJ Duerinckx and since then has continued to perform and welcome other artists in his performances regular extra and intra muros.

Transcultures is particularly moved to be a partner of this beautiful evening paying a lively and plural tribute to the composer Stephan Dunkelman who worked effectively within the Semaine du Son and also Transcultures. His great talent and generosity will survive his sudden death in November 2020.

« My job is to bring together Animated Time and Space. On the one hand, develop expressions of space for the musical; integrate them into those, already existing, of time or better, draw them in progress when new expressions of time are revealed. On the other hand, modulate sound patterns chosen for their morphological or imagic qualities by lighting up their rhiza to energize them. Play with the mental images they suggest and thus perceive the nature of the animated phenomena that result from them. The spirit of the dance and the need for silence are the transmitters that I have chosen to guide me. Their presence is imposed and forgotten during the composition phase to let the spiritual guide the senses. So that between the Earth and the Sky the listening is vertical. Even if I dance in silence, I can only do it with music … » Stephan Dunkelman

As a composer, Stephan Dunkelman has participated in many artistic projects and has won several awards in international competitions. His collaborations with artists from various disciplines open up endless fields of creation and experimentation. His music participates in the development of scenographies, choreographies (Michel Kelemenis, Michèle Noiret), exhibitions (Angel Vergara, Phil Billen) and contributes to the work of filmmakers (André Dartevelle, Wim Vandekeybus), directors (Derek Goldby), or musicians (Michaël Grébil, Maurice Charles JJ) and sound artists (Isa*Belle+Paradise Now). His work consists of bringing together Animated Time and Space. It is about developing on the one hand expressions of space for the musical; integrate them into those, already existing, of time or better, draw them in progress when new expressions of time are revealed. It is a question of modulating, on the other hand, sound patterns chosen for their morphological or imagic qualities by lighting up their rhiza to energize them, but also of playing with the mental images they suggest and thus perceiving the nature of the animated phenomena arising from it.

Multimedia artist and composer of electroacoustic music, Stéphanie Laforce creates her own creative worlds, between electroacoustics, transmedial installations, performances. She builds poetic sound devices for her electroacoustic compositions with which she develops original universes for theater, circus, exhibitions, installations. Her sound production embraces compositions with varied and very personal, poetic, socially committed, vocal or instrumental universes. She tries to answer an essential question: the place of humans in a machinic world.

As part of the No Lockdown Art project launched during the first global confinement in March 2020, Transcultures and the European Pepinieres of Creation asked several authors from different countries to write their poetic impressions, reflections, questions…during the confinement.). These “confined correspondences” have been the subject of sound production either by the authors themselves, or by other sound artists with creations of various aesthetics, each time adapted to the specificities of the poetic contributions which tell us both about these viral times and more generally about our societal but also emotional changes.

This event of performances supplemented by videos allowing an intimate discovery of singular artists of text and speech is part of this series of Sonopoetics (links between poetry and sound arts initiated by Transcultures and the Transonic label) meetings with variable geometry.

Hosted in Sonopoetics (as part of the series initiated by Transcultures/Transonic) residency at the Namur Delta in March 2021 (in partnership with Transcultures and the European Creation Nurseries), Maja Jantar (voice, soundscapes) and Paradise Now (electronics, guitar, voice) worked on material – textual and musical – common. In the end, a poetic audio performance integrating moments of improvised freedom as well as traveling and organic compositions.

For this first public appearance, the duo invites the sound / holistic artist Isa*Belle (FR) to join them for a few pieces combining electronics, guitar, vocals and singing bowls.

Under the pseudonym Ordinaire, Eric Therer (text) and Stephan Ink (bass-laptop) borrow from both sound experimentation and post-Dadaist heritage. The approach of the Liège duo is to collect images and sounds in our most immediate daily environment which have the value of essential icons. The dance halls along the national roads, the chip shops, the administrative burden … so many references that belong to the real or dreamlike cultural heritage of Belgium here poetized with humor, insolence and a low-tech aesthetic.

“Poévies” is an evolving audio-visual project (capsules, installation, film) initiated in 2018 by Philippe Franck in collaboration with Zoé Tabourdiot and produced by Transcultures. It is about capturing intimate moments of singular contemporary French-speaking poets, in reading / performance which can be mixed with short interviews in their spaces of creation / life by privileging the magic of the moment, but also that of encounters and accidents. happy “on the road”. To date, three first sections have been produced: the first with Quebec performer / publisher Richard Martel, the second with Montreal poet Catrine Godin and the third with Liège author / performer Eric Therer.