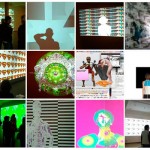 Launched by Transcultures at the occasion of Transnomades 2013 (Quinzaine Numériques of the Federation Wallonia- Brussels), the Transnumeriques Awards* – Art(s) & Network(s) intend to stimulate the online artistic creation giving it greater visibility .

The first laureats was Anne Roquigny & James Hudson, (for the WJs) ; The Le Clair/Obscur compagny ; Peter Friess et the Okus Compagny for the emergences.

The 2014 edition was focused to artworks created to be broadcasted via the web and displayed on a screen (gifs/glitches, Neen Art, memes, web platforms…).

Associated with these Transnumeriques Awards 2014 and Festival VIA, there was also:

Laureates of the Transnumeriques Awards @ Videoformes 2015